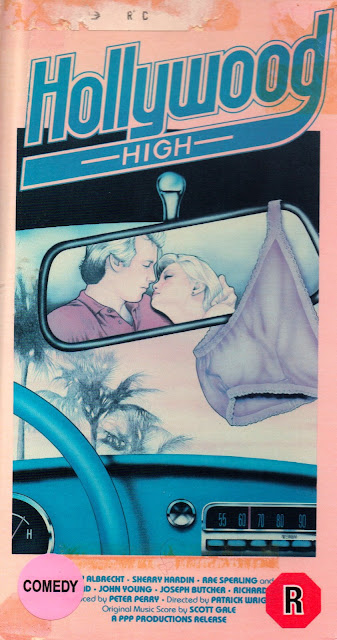 Hi, Burl here to review a Teen Sex Comedy! Ha ha, I remember being thrilled driving past Hollywood High on my first visit to Los Angeles, which after all was the alma mater for movie stars from Judy Garland to Lon Chaney Jr. to Alan Hale Jr! And the whole concept of a “Hollywood High” seemed both unreal and deeply enviable to someone who’d suffered through three years at a boring old regular high school!
Was an even suntan or a wickedly-painted boogie van good for extra credit at Hollywood High? Ha ha, did the students go on field trips to the movie studios and the beach? This truly must have been a unique and exemplary place to get an education, and what better way to get the real story than to watch a movie called Hollywood High!
The movie began just like any old cheerleader or carhop movie, with four girls driving around in a convertible yammering inanities; and ha ha, I have to admit my heart sank a little! But I kept watching! Beer helped (real beer, not the water the characters in this movie drink!), as did the fact that the four ladies – Jan, Candy, Monica and an especially dumb one named Bebe – made their way immediately to the beach to splash around in the surf for minutes on end, clad in the teeny-weeniest string bikinis the mid-70s had to offer! They meet an irritating Mexican stoner stereotype named Frasier Mendoza, and together they all smoke some pot, in a scene with all the solemnity, but none of the consequences, of an After-School Special! Then everybody dances!