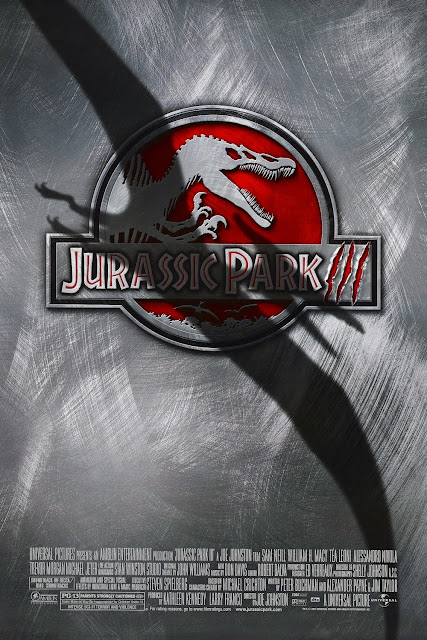 Growl snarl munch, it’s Burl! I’m here to review another in the DVD Threequel series, which is to say third movies in a franchise which I’ve never seen and am only catching up with because I own the DVD multipacks which contain them! Poltergeist III was one of these, and one of these days I suppose I’ll watch Robocop III as well!
This one is of course Jurassic Park III, which Steven Spielberg did not direct! He turned the reins over to former trick effects man Joe Johnston, and in all sorts of ways you can really tell! Gone are the slow-building dinosaur approach suspense scenes, in which their arrival is presaged by little ripples in a cup of water! This time around there’s an ingested cell phone that could have been used for that purpose, but Johnston muffs it! There’s also a scene which copycats the one in Indiana Jones and the Last Crusade, in which Indy’s friends, believing him to have gone over a cliff, gather at the edge to look down, while Indy himself strolls up unseen and peers over to see what they’re looking at! Ha ha, the version here involves Sam “In the Mouth of Madness” Neill, and it’s done in such a perfunctory way that it barely registers as the rip-off scene it intends to be! Ha ha!
The story begins with a parasailing mishap similar to the one in Club Paradise! A teenage boy crashes on Dinosaur Island, and his divorced parents, William H. “Fargo” Macy and Téa Leoni engage the reluctant Dr. Neill and his youthful assistant to help look for him! Along for the ride is Michael Jeter from The Money Pit and Drop Zone, and various other mercenary types; none of them last long! Ha ha, dino chow! Anyway, there’s a lot of pointless deception and equally pointless revelation packed into the 90 minute production, and a good dose of ‘saurus action!
That’s the great benefit of this picture, relative to the others in the series at least: it’s nasty and short in the best Hobbsian tradition! It’s also extremely predictable, and in that sense feels more like a theme ride than a movie! But it’s pleasantly tropical, which is why I watched it – it’s pretty cold ‘round these parts, and sometimes a few palm fronds are just what the paleontologist ordered, ha ha!
There’s not much else to say about the picture, really! The cast is above average for this sort of thing, the kid is not as annoying as he might have been, and the trick effects are unsurprisingly excellent! It’s a decent, forgettable popcorn muncher, and I’ll give Jurassic Park III two stinky cell phones!
Posted by Burl at 15:12