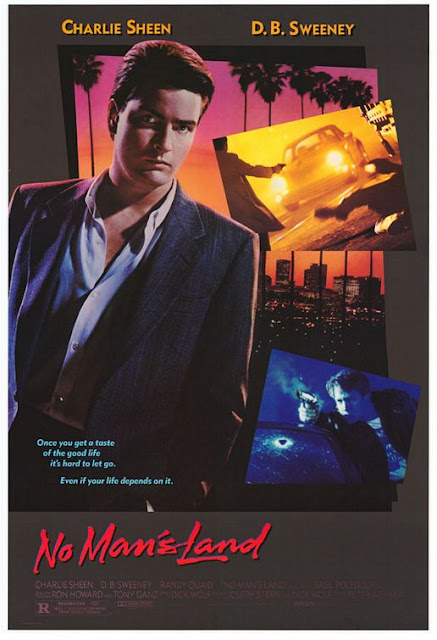 Hi, it’s Burl, reviewing this picture as quickly as possible! Ha ha, I’ve got a number of movies queued up and ready for review, but this one, which I watched just last night, bounded to the head of the pack simply because if I don’t do it now, I’ll forget everything about the movie and won’t be able to tell you a thing except that, despite the fact that it features two actors who would famously do the loop-de-loo later in life, it’s totally forgettable!
And it most certainly is that! I was working in a video store when this one came out, and recall seeing bits and pieces of it on the video store TV! My impression was that it was one of those high-style 80s movies like Less Than Zero or To Live and Die in L.A., where the pastel clothes and the neon lights and the swimming pools and blinding white walls overwhelm just about everything else in the movie! (I’ve never seen Less Than Zero, but I quite like the Friedkin picture, just for the record! Ha ha!)
No Man’s Land turned out not to be that! Well, there are a few moments of 80s style, and those were the moments that had conned me so many years before, I guess! But mostly it’s pretty flat, like a TV movie, which makes sense because it comes from a mostly-TV director! (They say TV shows are more stylish now, but ha ha, I wouldn’t know!) There’s not much suspense in the suspense scenes, if indeed there were any suspense scenes, and the car chases were determinedly unthrilling!
I guess ultimately it’s a people picture! We follow a young rookie cop played by D.B. Sweeney from Eight Men Out as he’s recruited by Lieutenant Randy Quaid from The Wild Life and The Paper to investigate a Beverly Hills-based Porsche-theft ring! Quaid believes most fervently that trust-fund slickster Charlie Sheen, from Due Date, is the maestro behind not only the car thievery, but the murder of the previous undercover man assigned to the case! Ha ha, wasn’t he lucky to immediately find another young cop with an aptitude for repairing Porches!
Sweeney gets a mechanic job at the dealership owned by Bill Duke from Commando, but quickly becomes pals with Sheen, and quickly after that becomes sed*ced by Sheen’s party-boy lifestyle (though Sheen claims to “hate drugs” – ha ha, he can’t quite sell that line!) and his lovely if personality-free sister! Meanwhile, many, many Porches are stolen and driven around – ha ha, there seems to be hundreds of the things on every street! Of course it eventually all comes to a head, secrets are revealed, and then there’s gunfire, end of picture!
Now, I said this was a people picture, and as such the most interesting aspect about it is some of the relatively subtle characterizations, particularly where Sweeney is concerned! He doesn’t become a Sheen doppelgänger, which would be the easy way to go, but rather becomes his own, rougher sort of slickster! Sweeney doesn’t do a consistently great job of dramatizing the bifurcation he’s feeling, but, despite often seeming like a poor man’s Spader, he’s not bad! Sheen is not bad either, and a mini-gallery of character actors, including Quaid, Duke, M. Emmett Walsh from Blade Runner and Grandview U.S.A. (who gets a big credit at the beginning but disappointingly is in the movie for all of a minute near the end), Claude Earl Jones from Impulse and George Dzundza from ‘Salem’s Lot (who was in No Mercy, No Man’s Land and No Way Out all in a row, ha ha), keep the acting generally strong! Only the sister lets the side down, I’m afraid!
It’s overlong and often dull, and could have used a great deal more style and pep! I’m likely to forget quite soon that I ever watched it, which is not a great sign! Whatever curiosity I developed about this picture back in my video store days is now satisfied, and I give No Man’s Land one crooked cop!
Posted by Burl at 22:55