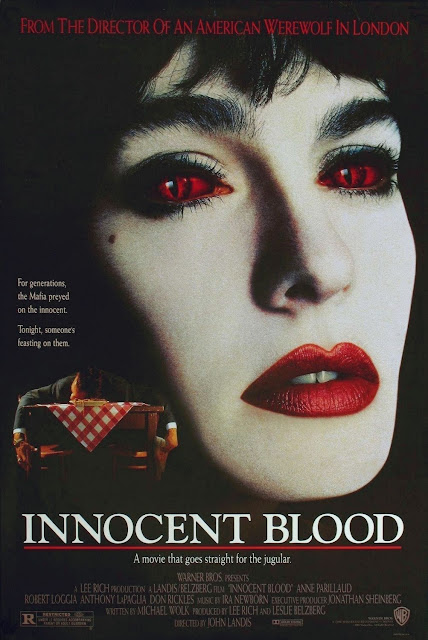 Ya pastrami, it’s Burl, here to review a John Landis horror picture I’d somehow never before seen! Ha ha, I guess this movie, Innocent Blood, is really the only other full-length Landis horror movie besides An American Werewolf in London, and it’s kind of a mystery why I didn’t go see it back when it first came out in 1992! I was going to see lots of movies back then, mostly at the budget cinema, and as a horror-loving Landis fan it’s inexplicable that I gave it a pass! Just one of those things, I guess! Now that I think of it, I was living in another city at that time and probably didn’t have much disposable income! Not like now, ha ha, ha ha, ha!
Well, I’ve finally caught up to the picture! I’d always assumed it was a fairly lightweight mock-horror picture, without much, you’ll pardon the expression, bite, ha ha! But turned out to be stronger meat than I’d supposed, featuring plenty of nudity and a decent helping of gore! Ha ha, a pleasant surprise!
It seems that a French vampiress is living in Pittsburgh for some reason (perhaps it’s  the same reason a British vampire is living in Detroit in Only Lovers Left Alive!), where she tries to live a low-key existence by preying exclusively on criminals! This backfires when she puts a non-fatal biting on good old Robert Loggia, whom we know from Psycho II and Armed and Dangerous and orange juice commercials; he’s a brutal capo who is at first totally confused to find himself a vampire, but eventually realizes it might just be a good way to conduct his business!
Our pretty hemogobbler, wishing to rectify her mistake, hooks up with undercover cop Anthony LaPaglia, from Betsy’s Wedding, and chases after old Loggia! But Loggia puts a biting on several of his underlings, figuring that by such a strategy he’ll soon be the ruler of the underworld in more ways than one, ha ha! He first bites his lawyer, Don “Toy Story” Rickles, but this ends in Rickles’ spectacular demise in a hospital when the curtains are opened to let in the daylight! Linnea “Witchtrap” Quigley plays the screaming nurse!
There are plenty of director cameos of course, this being a Landis picture! We see Sam “The Quick and the Dead” Raimi (a better actor here than he was in Indian Summer, ha ha!), Dario “Opera” Argento, Michael “Fletch” Ritchie and Frank “The Dark Crystal” Oz! And there are plenty of other familiar faces: David Proval from Mean Streets and Vice Versa; Kim “The Club” Coates, Marshall “Stand By Me” Bell, Angela “F/X” Bassett, Luis “The Limey” Guzmán; and, in the role of the cowardly paparazzo, Tom “Creepshow” Savini! Everyone in the movie is watching other movies: vampire pictures of course, of both Universal and Hammer varieties, but also The Beast from 20,000 Fathoms, Phantom of the Rue Morgue (the clip used includes that great skylight gorilla jump, ha ha!) and even Strangers on a Train!
I was indeed gratified that the movie delivered the goods, along with many incidental pleasures! On the other hand, at nearly two hours in length it’s absurdly overstretched, and it feels it! There’s a great deal of dialogue and incident I would classify as “dumb,” though, ha ha, I hate to be so negative! And I can’t say that Anne Parillaud, the vampiress, is very effective in the role! But in the end the good stuff just barely outweighs the bad, and while it’s no classic, it’s an enjoyable time at the movies! Had I seen in in the theater back in 1992, I’d have probably liked it even better! I give Innocent Blood two trademark Landis wildcat roars!
Posted by Burl at 20:47