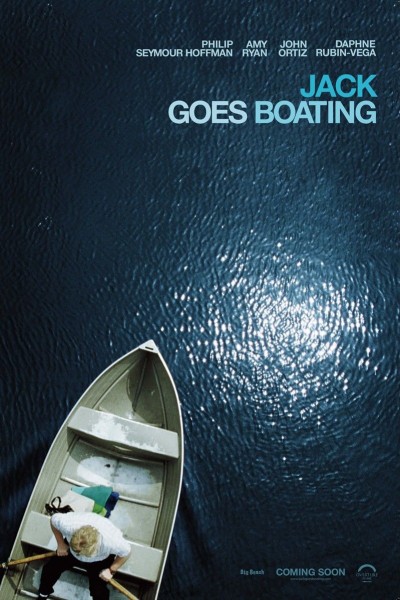 Hi… Burl here… to review a movie… where the main character talks quite slowly! I’m talking about Philip Seymour Hoffman’s directorial debut, Jack Goes Boating! I was curious to see what this picture was all about when I heard it existed, since PSH, as I’ll call him for brevity’s sake, tends to make interesting actorial choices, being in movies like Synecdoche New York and so forth! (Ha ha, I liked that picture, and was bewildered and delighted that it ever got made, but that’s a review for another day!)
In Jack Goes Boating, PSH plays Jack, a limousine driver who smokes a lot of weed and leads a sheltered life in which he speaks as infrequently as possible! He listens to reggaemusic and is always seeking out a positive jam! His best friend Clyde is a little more manic, an Hispanic fellow with a frightening-looking wife named Lucy! Clyde likes to help Jack out with his life’s goals, like learning to swim or finding love! These parts of the film are quite touching, and Clyde’s ingratiating smile – which reminded me of Robert Glaudini’s, the star of Parasite, who also, as it happens, wrote Jack Goes Boating, ha ha what a coincidence – makes it that much sweeter!
Soon Jack finds himself going on awkward, strange dates with another awkward, strange person, a co-worker of Lucy’s named Connie! After that it’s a story of how to best attract this lady, and the course of this nascent love runs remarkably smoothly for one of these movies! Only in the final act, where a drugs party breaks out, is the course of true love threatened! But, ha ha, not for long, thankfully!
There are happenstances throughout the picture, like a terrible occurrence that puts Connie in the hospital! It’s a strangely undramatic picture nonetheless, until the last act anyway! And then the drama kind of fizzes up, reduces, fizzes up again, reduces, and so on! It’s pretty realistic that way, ha ha, resulting in just the sort of stylized yet grounded atmosphere many independent drama movies are reaching for but can’t attain! Ha ha, well done PSH!
And of course it all ends with the boating scene promised by the title! I do have to say that I was mislead by the title and poster of the picture, which makes it look like a summer film concerned with summertime leisure activities! In fact it’s a winter picture with many scenes set during extremely cinematic snowstorms! That’s not a problem unless, like me, you prefer to watch your wintertime pictures in the winter (mixing them up, of course, with goodtime warm-weather concoctions); and even then it’s not what you’d call a big problem!
It’s an enjoyable slice-of-life picture, a little contrived maybe, and not particularly hard-hitting in any sense, but it ultimately manages to be just the positive jam its protagonist holds so dear! I’m going to give Jack Goes Boating three smoked toasts!
Posted by Burl at 16:17