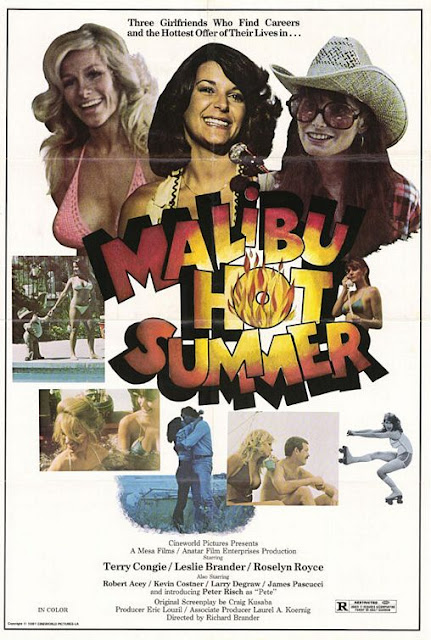 Ha ha, hey baby, it’s Burl, here to review an early picture featuring the Cos! No, not Bill Cosby, sad to say, but the other, paler Cos: Kevin "Fandango" Costner! His picture Malibu Hot Summer (known on video as Sizzle Beach U.S.A.) brings us to the titular beach community, which is of course a frequent staging ground for such shenanigans as this movie has to offer! The story runs as follows: Janis Johnson, an aspiring singer with a strange, crooked smile, is driving to L.A. to make it big; along the way she meets fellow naïve Midwesterners Cheryl Riley, a pert-nosed, big-chested blonde, and Dit McCoy, a short ‘n’ kooky brunette who has just co-inherited a beach house with her cousin Steve! Dit invites the other two to stay with her at the beach house, and the rest of the movie details the trio’s romantic and employment-related adventures over the next few weeks!
Cheryl is a fitness freak, who in true 70s style is shown munching wheat germ and gulping down raw eggs, ha ha! Jogging on the beach, she meets a rich, middle-aged broker who looks just like John Hillerman! He charms her into dinner and helps her find a gym teacher position at a local high school; it seems certain he’ll prove too good to be true! In short order he’s demanding Cheryl marry him, but, wanting at least a few years to taste the swinging 70s Malibu lifestyle – and who can blame her? – she refuses, and when he issues a stern “marriage or nothing” ultimatum, she dumps him and his moustache too!
In the meantime, though the house seems like it should be bigger than that, Janis has been forced by a lack of sleeping space to bunk with cousin Steve! Slowly, and only after a replay of a stock sitcom situation dramatized also in the movie Starhops (the noises of an innocent but difficult task undertaken by two members of the opposite sex overheard by others in an adjacent room and mistaken for the grunts of coitus), Janis and Steve’s initial mutual dislike evolves into a highly unconvincing romance! Steve is some sort of music producer and takes songbird Janis to a studio he knows, where a reptilian impresario named Von Vitale promises to put her in his singing contest!
As all this is going on, Dit, a Colorado girl and horse lover, is out seeking riding lessons! She comes upon a ranch owned by the young Cos, and managed by his assistant, a Corvette-driving, cigar-chomping midget in a serape! Costner hides the fact that he’s the owner (and owns a number of other ranches besides) so that Dit may come to love him for himself, not for his dogies and lariat and rancher’s millions!
The three stories intertwine lazily as the movie progresses, much in the manner of one of Roger Corman’s nurse or schooteacher pictures, and the near-imperceptible nod in the direction of a plot comes when Von the slimeball impresario’s contest turns out to be fixed! Coincidentally, the lascivious midget is friends with Von, and he tips Cos off to the fix! To remind us of Von’s epic sleaziness, we are treated to a fantastic party scene at which Janis is given some pot to smoke, which in turn gives the director an excuse to mount the single worst stoned-POV scene ever shot! No flashy optical effects or coloured lights, just good, old-fashioned slowed-down voices, tromboning focus and the rinky-dinkiest prism filter of all time, ha ha!
Costner and the midget take care of the fixed contest by stealing the clothing of the people who’d been earmarked by Von to be the winners! Naturally Janis wows the room with her laid-back folky style and wins the contest handily! And that’s the end!

As a released-before-they-were stars embarrassment-fest, Malibu Hot Summer fills a minor and pointless niche in the pop culture cubbyshelf! More importantly, it delivers on the Malibu scenery, the nuggets of Hollywood eccentricity, the frequent shots of wave crashing on a beach! And best of all, it's a lean and mean delivery system for 70s nostalgia, well able to make you weep for your old days of beachside living whether or not they ever actually happened! On that level it's a masterpiece: what Gone With The Wind must be to people who unaccountably wish they'd been born during the Civil War! Ha ha, I give it two malfunctioning doorknobs!