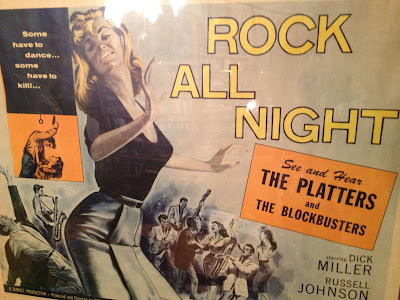 Hi, Burl here with a review of another Roger Corman picture! Ha ha, I always like those Corman movies, and of course I like his Poe pictures as much as anyone, but his grimy little black and white five-day wonders do an awful lot of good for me too! This one, Rock All Night, is a classic example! It would make a good companion piece to Carnival Rock, but it’s leaner and livelier and a lot less depressing! Also, Dick Miller has been moved from a supporting role to the lead, so I’d say it’s an improvement all around!
Dick plays Shorty, a little guy with a big chip on his shoulder! He gets kicked out of a club where the Platters are singing an awesome number – actually he gets carried out under the bartender’s arm – and makes his way to another joint nearby! This one is a little more welcoming to Shorty, but has the distinct disadvantage of being the place a couple of gun-toting gangsters have chosen to hole up! There’s also a nervous singer who’s auditioning for a singing job at the behest of a portly beatnik named Sir Bop; a surly shakedown fellow; a bewildered reporter, a muscle-bound truck driver and his salty lady friend; a would-be boxer, his manager and his wife (played by the lovely Barboura "Sorority Girl" Morris from A Bucket of Blood, ha ha!); and the sad-sack bartender who serves drinks to them all!
It’s a fairly big group of people, and helps keep your mind of the inertness of the setting! Ha ha, the bar is a pretty dingy little place! But the picture is only sixty-two minutes long, after all! It was based on a twenty-five minute TV play called The Little Guy, and the great screenwriter Chuck Griffith, who adapted the play for Corman, just threw in a bunch of extra characters and some musical numbers from the aforementioned Platters and a pretty good group called the Blockbusters!
It’s Dick’s character, Shorty, that keeps the whole movie lively! He needles everybody, no matter if they’re two feet taller than him or if they point a gun at his nose! He doesn’t care! And so in the end, after all the big guys fail to defuse the gangster situation, he becomes the hero! Perhaps the greatest hero of them all! And the movie ends with him strolling off with the singer on his arm to catch a screening of King Kong! Ha ha, how happy can an ending get?

The movie’s a little one-note, as I mentioned, and it never displays the wit of something like A Bucket of Blood, but it’s still packed with great stuff! It’s got an all-star cast – Bruno Ve Sota, from Attack of the Giant Leeches, makes a surprise cameo, Russell "The Horror at 37,000 Feet" Johnson plays "Jigger," the main gunman, and we also get Beach Dickerson from Attack of the Crab Monsters and Jonathan Haze from Not Of This Earth! Plenty of others too, and Sir Bop is played by the great Mel Welles! I give Rock All Night three marvelous striped bomber jackets!
Posted by Burl at 00:18