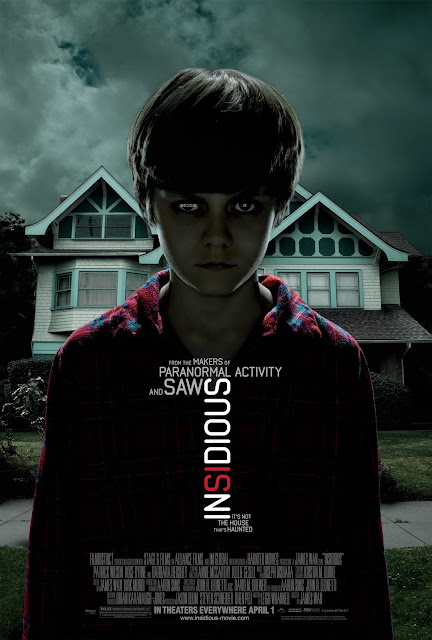 Hi, Burl here with a review of one of the newer horror pictures out there! This one is called Insidious, and it’s a spookshow from the guy who made that movie Saw – but I’ll try not to hold that against him, ha ha!
This movie is about a little kid who goes into a mysterious coma, or at least he just won’t wake up one morning to go to school! At first his dad, essayed by Patrick Wilson from Prometheus, thinks that maybe he’s just being lazy, but no, it looks like the problem is of supernatural origin! Mysterious figures begin to stalk the house, including Darth Maul and Barbara Hershey from The Right Stuff! The family moves house, but there’s no improvement! So, having seen Poltergeist, they know to bring in an eccentric lady medium and her two assistants to try their hand at solving the problem!
The lady medium, played by Lin Shaye from Big Ass Spider!, is quite a bit taller than Tangina was, but her methods and her copious explanations for what’s going on are quite similar! Turns out the kid is trapped in a hazy dimension of spirits, and there are evil presences looking for a spare body to invade! There are rules to this bodysnatching which the movie quite flagrantly ignores later on for the sake of a scary ending, but that’s okay! We get plenty of spooky moments and some nice instances of boo!
It’s a pretty cheap film, and while this is mostly very impressive in light of what it achieves and the general level of quality, it’s also annoyingly manifest in, particularly, the image quality! It really screamed video to ol’ Burl’s eyes, and I’m not normally one to be too picky about these things! I’ll always prefer film to video though, even if we’re talking about grainy 16mm! That format isn’t really too expensive, you know, and for a horror movie it’s completely appropriate! People just use video so they can look back at their footage right away instead of waiting a day or two, and to those people I say what’s the matter, no confidence in your skills? No patience? Ha ha, give film a try, you’ll like it!
Insidious had a few other stylistic problems, like awkward transitions, poor songcraft from the mom (no wonder the ghosts prefer Tiny Tim!), and some cheesy phantom dimension stuff in the second half! But on the other hand it’s really great to see a movie that tries to be scary and succeeds at it even a little! And I was always a fan of Poltergeist, so I didn’t mind seeing it aped so devotedly, ha ha!
The real problem is that they explain way too much what’s going on, and show it too much as well! In that way it reminded me of The Evil, a haunted house movie from 1978 or so that’s really effective in a low-budget sort of way for most of its running time, until it turns out that the problem with the house is that there’s an ice cream suit-clad Victor Buono living in the basement! Ha ha, even though he’s supposed to be the devil, it does tend to bleed the situation of much of its menace!
I give Insidious three clown dolls and a hearty ha ha for taking a $1.5 million budget and multiplying it 36 times at the box office! Using relatively small amounts of money to make quality genre films is one of the key things that will carry the film industry as we know it into the future – that’s Burl’s prescription for Hollywood’s woes, and you can take that to the bank! Ha ha!