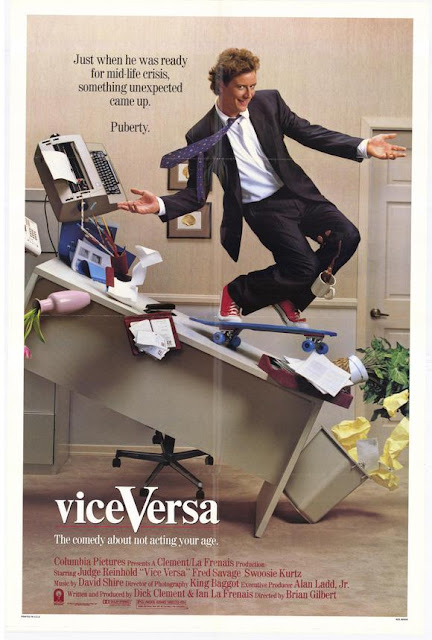 Ha ha and changeabouts, it’s Burl, here to review another holiday holdover! It’s one of those body-switch pictures from the late 1980s, Vice Versa! Ha ha, of course you recall that there were a bunch of movies made on this theme at that time: Like Father, Like Son, 18 Again and the dark horse, Dream a Little Dream! Ha ha, sometimes Big is included in this roster, but it’s technically only half a body-switch picture, though it was twice as popular as all the others! (All of Me is another thematically similar outsider, ha ha!)
I gave all of these things a pass back at that time, and continued to ignore them long into my adulthood! But now I have a son myself, and it made me think: what if this thing happened to us one day? Ha ha, I’d better be prepared! So I sat down one recent evening and put on Vice Versa, which always seemed to me the most interesting of a pretty anemic lot!
Here the dad, Marshall, is a workah*lic (natch!) department store executive played by Judge Reinhold from Beverly Hills Cop and Gremlins and Ruthless People! His son Charlie is played by Fred Savage from The Princess Bride! Through a series of lazy plot convolutions, an enchanted skull, stolen from the lamas of Nepal, ends up in their possession, and indeed possession is the key word here, as it somehow effects a personality transfer! Naturally Marshall is in the middle of some kind of business deal, which the child must now see through; and the father, entrapped in the corpus of his issue, is forced to deal with tests and bullies and little girls, ha ha!
Of course this concept is inherently creepy, and maybe the pleasure in watching these movies comes from observing how they attempt to dilute or sidestep or otherwise wrestle with this built-in grotesquerie! Vice Versa tries to ignore the implications until late in the game, when it briefly appears ready to embrace the inevitable quasi-Oedipal consequences, in a scene in which the father, in his son’s body, peers in as his eleven year-old son, in the father’s grown body, prepares to make l*ve to a pretty lady! No, ha ha, it’s not his own mother, and anyway this event is headed off at the pass before any actual consum*tion!
I think the other notable aspect of these is that the screenwriters, believing something inherently interesting will emerge from the situation, feel free to stay as lazy as outfielders when creating their characters! They stick with the stereotypes (overworked dad, fun-loving pre-teen) and add nothing to them; the result therefore is simply one stereotype swapping places with another! Ha ha, that’s certainly the case here, and, aside from the vaguely Christmas-y setting, there’s not a whole lot else on offer!
But there’s a bit! We get some actual location work in Nepal, which is pretty amazing; and the movie as a whole is more engaging than it has any right to be! The supporting cast includes pretty Corinne Bohrer from The Beach Girls; Jane Kaczmarek from D.O.A.; William Prince from The Paper; David Proval from Mean Streets; Elya Baskin from Deep Star Six; Jane Lynch from The Fugitive; and even James Hong, director of Teen Lust! So there are a lot of familiar faces, and that helps matters!
I don’t think the movie is going to help me much if I myself undergo a body switch, but then again who knows! At least I can now say I’ve seen one of these movies, and while I’m not going to rush out to see a second one, I may give 18 Again a try, just to see if the advanced ages (18 swapped for 81) makes any fundamental difference! In the meantime I’m going to give Vice Versa one smoking skull mouth!
Posted by Burl at 09:38