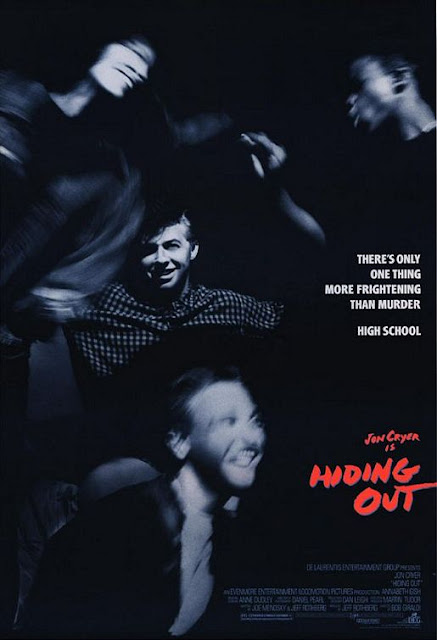 Hi-hi-hiding out, it’s Burl! Ha ha, yes, I’m here to review Hiding Out, one of those many 1980s high school pictures! I didn’t ever bother seeing this one back in the day, most likely because I felt I knew exactly how it would play out in almost every detail! Well, I was almost right – there are a few minor surprises here, but not many!
The concept is pure 80s! Ha ha, a stockbroker, played by Jon Cryer from Due Date and Heads, outfitted with a fake pencil-beard, finds himself in trouble when the feds want him and two of his stockbroker buddies to testify against a shady client! When hit men perform a shooting on one of the buddies (ha ha, it’s Ned Eisenberg from The Burning and Moving Violations), Cryer is placed in witness protection, and when that goes sour he shaves his beard, insults his hair and, ha ha, “hides out”as a student in his younger cousin’s high school!
Whether or not this is a convincing development is wholly beside the point, ha ha! The point is supposed to be the laughs, such as when poor Max (as he’s named himself, after glancing at a can of Maxwell House) must hide from his aunt under a pile of his fifteen year-old cousin’s dirty laundry! Ha ha… ha? Actually that was one of the bigger laughs! There are others too, and a few unexpected elements as well! For instance, a young lady in the school falls for Max due to his relative maturity and poise, and the BMOC she throws over in Max’s favour (a character played by Tim Quill from Staying Together and Next of Kin), turns out not to be the typical 80s high school baddie, but a decent fellow who can easily be talked down from a fight!
Unusually for a stockbroker in the 1980s, Max has no respect for disgraced prexy Richard Milhous Nixon, and when a gruesome old bat of a teacher (played by Nancy Fish from Exorcist III) mounts a gravel-voiced defence of that scoundrel, Max insists on telling the truth of the matter! It’s a gratifying and mildly unexpected scene! On the other hand, there are many irritating scenes of the young cousin (Jackie “The Prey” Coogan’s grandson Keith) trying to learn how to drive from uptight instructor Richard “Ghost Dog” Portnow! These scenes were for me like the “stepping on a rake” gag in The Simpsons, only the accumulation never got any funnier!
It’s a movie of virtually no substance, which seems to be wasting its potential gags as a matter of pride! Jon Cryer’s performance is not bad, however, and the ending I expected, in which the nearly thirty year-old stockbroker gives up the girlfriend half his age to the fundamentally decent boyfriend she had before he came along, did not materialize! That’s in the movie’s favour I guess, even if it’s a bit creepy! The thriller bits of the film were not particularly thrilling, but there again the picture defied my expectations simply by it having more such bits than I expected, and a steeper body count!
In the end we’re talking about a highly inessential bit of 80s flobatussin, which I recall espying on the shelves year after year as I toiled at my video store labours, and completely ignoring! If not for my stated pledge to review all the movies, I likely would have continued to ignore it! Now that I’ve seen it, I give Hiding Out one and a half student elections!
Posted by Burl at 22:43