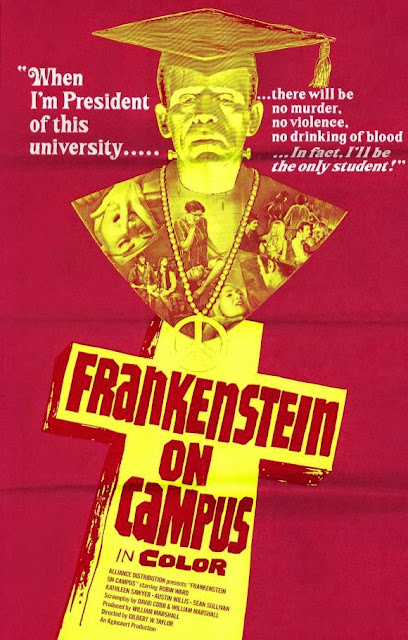 Ha ha, as you North Americans say, it’s Burl! Yes, I’m here with a very peculiar movie to tell you about today, Flick! I’m not sure why it was ever called Flick – probably some attempt at pre-emptive self-effacement! As in “Ha ha, don’t be expecting Citizen Kane here; this is just a simple flick!” Anyway, the movie was quickly retitled Dr. Frankenstein on Campus, a name by which it’s probably better known and which suits it better in any event!
Because it’s about exactly that! We first meet young Viktor Frankenstein as he’s tossed out of his posh European university for dueling! Quickly he relocates to the University of Toronto, where he finds a grumpy, silver-tongued dean, a solicitous but strangely-acting professor, a nubile young journalism student who can’t keep her brassiere on, a tae-kwon-do expert who is for some reason Viktor’s friend, and a situation of campus unrest which seems to have been imported from movies made two or three years earlier!
Viktor suffers constant references to the famous character whose name he shares, and faces these jibes down with the same steely-eyed glare he has theretofore kept in reserve merely for pets, lovers, dope-smoking radicals and any other living creatures which cross his path! He’s there working on a program of brain control, which happens to be exactly what his professor is working on too; Frankenstein, however, is convinced the process can be made wireless!
But there’s trouble! Viktor attends a crazy student rumbustification at which flower people don helmets and engage in headbutt parties; where motorized exercise contraptions are put to uses other than for which they were intended; and where mind-drugs are smoked! Viktor is photographed while peering disdainfully at a foil-wrapped package; this snap and an accompanying article make the front page of the student paper, and Viktor is immediately expelled by Dean Wormer Cantwell on suspicion of being a drugs fiend!
Well, it’s vengeance time! Viktor inserts a mind controller in his tae-kwon-do pal Tony, and Tony becomes a robotic chopmaniac, punching people to death left and right! The fellows who refused to stand up for Viktor, the photographer who took the picture, the reporter who wrote the story and finally the dean himself all fall victim to bops, bashes and biffs, and some pretty stiff neck-twists in the bargain! Then finally there’s a surprise ending involving a clumsy child, Professor Preston, some radio control boxes and a bunch of unraveling stitches!
Robin Ward, whom we know from Explosion and, later, game shows, plays the sulky, foppish Viktor with maximum haught! (But don't call him uptight - he is very down loose, ha ha!) His would-be mentor, Professor Preston, is essayed by Sean Sullivan, the old bank guard from The Silent Partner and Johnny’s dad in The Dead Zone! The relationship between these two brain scientists, and the dean too, and the campus science atmosphere in general, strongly recalls (or foreshadowed) the great Re-Animator, but almost nothing else does! Ha ha! I’ll tell you, it could sure use some good old Re-Animator gore, but of that it has none!
It’s a weird movie: plenty of setup and then a bizarrely rushed conclusion that makes just no darn sense! Ha ha, it’s got one of the baggiest, most amateurish scripts ever written in terms of structure and, well, just about everything else; the dialogue is all crazy gobbledygook and boring declamation; the characters are silly cartoons! It has virtually none of the ingredients commonly thought to make up a good movie!
And yet there’s also a strange innocence to the whole affair, and a great deal of odd detail, and a tiny soupçon of exuberant goofiness; and all of this makes it more palatable, and even enjoyable! If you’re a fan of the band Lighthouse you will surely have some itches scratched as well! (I’ve always found them too moustache-jazzy myself!) Plus it has nude bosoms, which I wasn’t expecting, though given the generous helpings of same in contemporaneous Canadian films like Homer and Paperback Hero, maybe I should have been!
Anyway, I’ve gone on long enough! I can’t recommend this movie very highly, but at the same time I urge that you watch it! And if you can’t find it, then at least read the fine review of it at Canuxploitation, the excellent website from whence I poached the image seen above! I give Flick, aka Dr. Frankenstein on Campus, one and a half majestic housepet battles!
Posted by Burl at 00:07