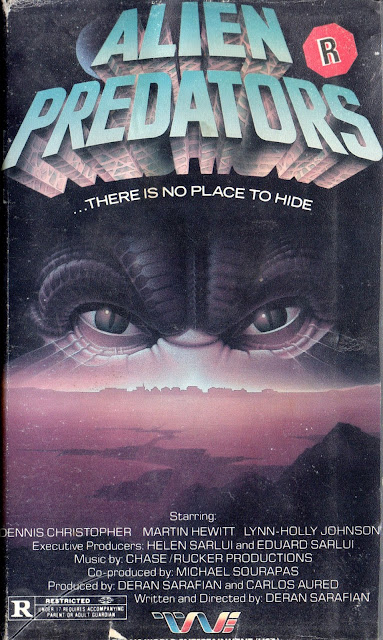 Hi, Burl here! I remember watching Alien Predators way back in high school! I probably watched it with my good friend Doug, and if I remember correctly, we both thought it was boring and uneventful! I couldn’t remember much about it, except that someone got a head shaped like a football, and that there was an RV in it!
That’s why I even bothered watching it again: the RV! Ha ha, I love an RV movie, especially when there’s a siege scene, or at least a scene of menace! I’m sure you’ve all seen that terrific picture Race With the Devil – that’s more or less the model for this microgenre as far as ol’ Burl is concerned!
This picture, which was directed by the son of the guy who made Vanishing Point, takes place in Spain for reasons I never figured out! But the main cast, three young people driving around the country in a rented RV, are all American, and three more annoying people you’d be hard pressed to ever meet! Ha ha, there’s two fellows and a girl, and it’s kind of a friendly romantic triangle that never turns into the Jules et Jim situation that would have made it more interesting! No, they’re all stuck in the aggressive flirtation stage of their isosceles, and something about the way they prosecute it makes them seem kind of dim-witted! At any rate, it takes up way too much screen time!
The actual plot is supposed to be about an alien virus which crash-landed on Earth along with Skylab, and now, some years later, has infected the citizens of a small Segovian town, the very town our troika of heroes is fun-truckin’ their way through! A Spanish NASA scientist explains all this to the kids, and informs them that head-bursting is part of the infection process! Yes, we do get to see a head bursting right at the end of the picture, and it’s not too bad! Really adds some spice to the thing, and spice is something this movie desperately needs!
An exotic if perplexing setting, some head-bursting and an RV – those are the ingredients for a magic sauce! But this picture is no magic sauce – it’s barely worth a hucklebuck! It encourages lots of questions, though! Ha ha, who is the fellow in the neat-looking truck? Is he meant to be an alien-possessed madman? And why is there a big NASA laboratory in Spain? Don’t they do all their work in Florida or Texas, somewhere like that?
There’s a bit of a siege against the RV, but it’s limited to a short bit involving an ugly alien crab chattering at the window, like a lost scene from Without Warning or something like that! Ha ha, it could have been a lot more exciting, and you can say the same for the entire movie!
I feel like I’ve been down on a lot of movies for the same reasons of late: namely, that they’re sadly deficient in eventfulness and action! I really should seek out some pictures that Deliver The Goods, which is what I always hope for when I sit down to watch a movie like this! Well, there are some goods delivered – what special effects there are, and what can be made of them through the murky photography, appear to be pretty good, and come courtesy of Mark Shostrom, the man behind the trick effects of A Nightmare on Elm Street 2 and The Supernaturals!
Otherwise I don’t have a lot of marvelous things to say about Alien Predators, and I guess I’ll give it one irritating venetian blind shadow!
Posted by Burl at 23:00