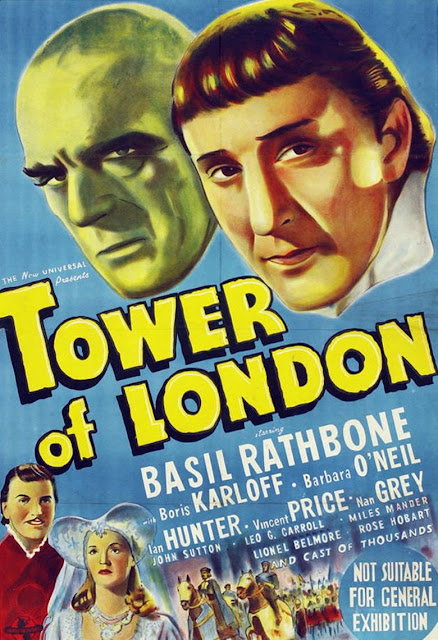 Hi, Burl here with a bit of history for you! I don’t think it’s what you’d call very accurate history, but it sure is exciting and scary! Ha ha, when you’ve got Boris Karloff playing a hulking, club-footed executioner named Mord, you know it’s going to be a journey into fright!
The picture’s called Tower of London, and though it gets called a horror movie a lot, and is filled with horror stars, and is directed by Rowland V. Lee, a guy best known, inasmuch as he’s known at all, for his horror movies, I’d still say it sits somewhere in the netherworld between spookshow and straight historical drama! But I guess classifying the movie isn’t  the most important thing now, is it!
It’s the story of Richard III’s cruel and heartless path to the throne of England! Ha ha, he keeps a wee dollhouse with figures representing all those between him and the crown, and every time he manages to get rid of one, he tosses their doll into the fire! As this takes him several years, I had to wonder that apparently no one, a servant dusting the room for instance, or maybe one of his wives, ever found his macabre and rather incriminating little display!
The one-by-one nature of his fatal userptions gives it a bit of a slasher move aspect too, like Prom Night or something, which is a little bit of extra fun for those of us who know that genre! And the aforementioned great cast of horror stars is yet another marvelous bonus! Ha ha, we get Basil Rathbone, well known from The Scarlet Claw and the other Holmes adventures, as Richard the Crookback, Vincent Price from Dead Heat as his ineffectual drunkard brother Clarence, Leo G. Carroll from Tarantula as a royal adviser and of course Karloff, from Bud Abbott and Lou Costello Meet the Killer, Boris Karloff, as the terrifying, completely fictional Mord the Dragfoot who is totally and creepily dedicated to his humpbacked master Dick the Third! The rest of the cast is pretty good too!
There’s some good gruesome stuff in this picture! There’s a head-chopping, which of course was a very popular activity of the day, and some scenes in Karloff’s torture chamber, with an iron maiden and a rack and other terrible items; and then of course there’s the scene where Clarence and Richard get into a drinking contest and of course, as we know from Shakespeare's play, Clarence ends up in a butt of his favourite Malmsey! Ha ha, how much is a butt, you might be wondering? It’s about three hogsheads! Plenty enough to drown in, anyway! Poor Clarence!
Of course Richard and Mord get their comeuppance on the battlefield, but it’s a long road of murder and torture and intrigue and deceit before then! It all looks great, with that wonderful 30s Universal gleam and some pretty lush sets! It’s a fine picture for sure, and I’d be so bold as to give it three and a half V.I.P. booths!
Posted by Burl at 21:34