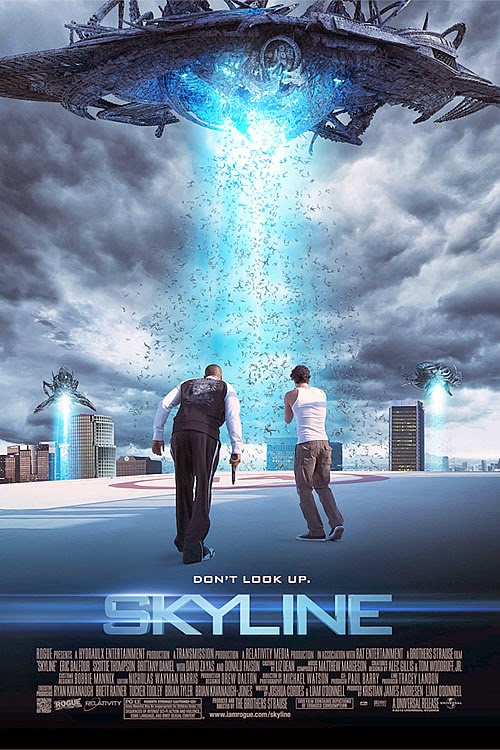 Ah ha ha, it’s me, Burl! I thought I’d review a newer alien picture that I watched the other day! It’s called Skyline and it was made by two brothers who usually do trick effects in other people's movies! These guys apparently financed the picture themselves and shot it almost entirely in the Marina Del Rey condo that one of them lives in!
I’m sure you’re wondering “Ha ha, Burl, why would you watch a movie like that? Don’t you know it won’t be worth a cruickshank?” Well, having heard the background information on the movie, I sort of started thinking of it as a modern-day, California version of a Don Dohler backyard-Baltimore alien caper! And I wondered what something like that would be like!
Well, ha ha, it’s not too good! It seems that a group of fairly dumb people are getting together in Los Angeles for a birthday party! The party takes place in the condo, of course, and then, after we’ve gotten to know the characters enough to realize we don’t like them very much, the alien braineaters make their move! Dazzling blue lights fall from the sky and zombify anyone who dares stare into them! And then you float up into the sky and are hoovered into one of the massive spacecraft which hover over the city at what must be precisely the altitude prescribed by the FAA or someone, since that’s where all the alien spacecraft squat, from V to Independence Day to all the rest of these kinds of movies!
The movie follows these characters as they try to escape the nefarious space creatures, who have different forms and are hard to tell apart from their space buggies if you want the truth! The backyard nature of this particular picture, and the general stupidity of its characters, means that every attempt to leave the building is stymied pretty quickly, and the movie takes on a vaguely Sartrean or maybe Buñuelian aspect as the characters try again and again to exit the building, only to find themselves back in that same condo, engaging in the old Night of the Living Dead debate about whether to hole up and wait for help or make some attempt to escape! It gets tiresome pretty quickly, since if you’ve ever seen a siege picture the same argument will seem to have been raging long before the movie even began!
Eventually, after a valiantly stupid rooftop fight against the aliens, where the main fellow, the dumbest one of all, ends up punching wildly at the alien middle-school wimp-fight style, the two main characters end up in a spaceship where they discover the true reason behind the aliens’ invasion, which is in the nature of a snack run! The E.T.s reminded me of Vermicious Knids, and their antics were initially interesting since they seem more like animals than super-advanced conquerors of the universe; but the last scenes of the picture rapidly become extremely silly, and one is grateful to see it come to an end!
It’s not a total loss, though! Sure it tries much too hard and is never scary or exciting or awe-inspiring in the way it intends to be, and the effects, which are near-constant in the movie’s second half, have a weightless quality that drains them of import; but it still manages a couple of nice images, and though you think about legions of glasses nerds chained to render farms rather than a few sci-fi geeks freezing their buns off in a Baltimore backyard, that Dohler can-do spirit I love so well can still be detected faintly around the margins of this bombastic but boring butterberry of a picture! Also, the movie features a performance from the actor Robin Gammell, who’s so good in Rituals and Bells! Ha ha, I was surprised to see him! I give Skyline one single annoying girlfriend!
Posted by Burl at 00:15