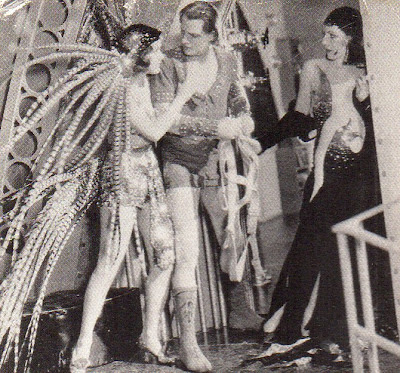 From out of the clouds appears a huge, cigar-shaped aircraft – it’s Burl, riding aloft a dirigible, here to review a movie for you! Ha ha, what a fanciful scenario! And yet it’s somewhat less fantastical than the climax of this olde-tyme domestic comedy-drama!
It’s called Madam Satan, and it’s a pre-Code comedy of manners from none other than Cecil B. De Mille! I was very excited to watch it, because, you know, DIRIGIBLE MOVIE! I love those! Ha ha, I’m a huge fan of Frank Capra’s Dirigible, for example, a rousing adventure I’ll review here soon! But De Mille of course is legendary for his spectacle and excess, so naturally I thought “Ha ha, C.B. De Mille + dirigible = delirious cinematic bliss!”
It didn’t quite turn out that way! The movie is nearly two hours long, and more than half of that is generally dreary, unfunny, wildly overextended bedroom farce of the sort where people race in and out of doors, hide in closets and lurk beneath satiny bedclothes! It seems there’s a rich lady, Angela, whose husband Bob, played by Reginald Denny from My Favorite Brunette, is fooling around with a chorus girl named, naturally, Trixie! Bob’s dipsomaniacal pal Jimmy, played by the great Roland Young, gets mixed up in this triangle when all he’s trying to do is help out! Eventually Jimmy, who is a rich industrialist, throws a crazy costume party on a blimp, and all the confusions are first greatly amplified and later, in the midst of a proto-Hindenburg disaster (well, nearly!), are sort of worked out!
Ha ha! I know, it sounds great! And parts of it are great, but not nearly enough! I don’t know, maybe my expectations were just too high, because, you know, DIRIGIBLE MOVIE! My main complaint is this: Bob, who is supposed to be a put-upon husband, perhaps a bit of a rascal but ultimately decent, like some upper-crust Homer Simpson, is in fact a fool, a bounder, a twister and a cad! He’s totally unsympathetic, and why his wife wants so desperately to reclaim him was a complete mystery to me! Angela, on the other hand, is a decent sort, but everyone in the movie, including herself, concludes that she’s ultimately to blame for her husband’s houndogging ways!
Of course this is a movie made in 1930, so the attitudes were a little different, but it’s still irritating simply because it doesn’t make any sense as human behaviour of any period! Luckily as a balm to all this we have a touch of the De Mille spectacular, and of course the insane costumes on board the dirigible! The dirigible runs into trouble when lightning strikes it and it tears loose of the mooring mast, but this was seven years before the Hindenburg disaster, so there’s no visual reference to that event, except accidentally! The greatest part of the picture is when all the weirdly-costumed guests parachute out of the doomed craft and land in strange and undignified places!
There’s plenty to like in this movie I suppose, but it really isn’t all that good! There’s a fantastic cameo from The Spirit of Electricity, some ribald pre-Code shenanigans and the mugging of Roland Young, the novelty of Lillian Roth from Alice, Sweet Alice in the role of Trixie, as well as a few other interesting performances; but the tepid farce and the irritating character Bob, and the fact that the dirigible interior seems like nothing but a ballroom set dressed up with a few girder-like structures here and there, as though in a dirigible you can ride around in the whole thing rather than just a gondola below, take it down quite a few pegs! I give Madam Satan just two bespangled masks!
Posted by Burl at 14:51