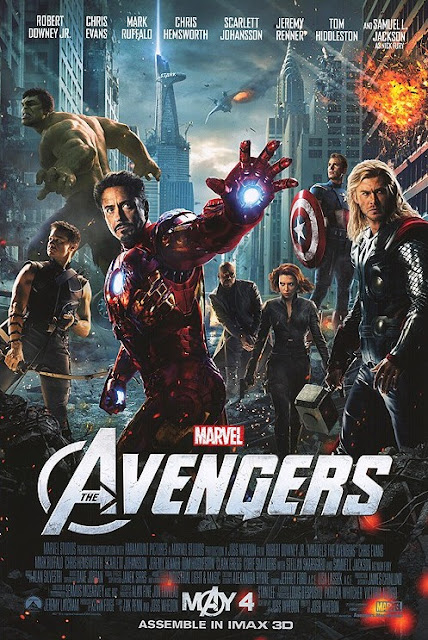 Hi, Burl here to review another summer blockbuster type of picture, the second one after Prometheus! This one is about super heroes, and that of course is a very popular genre just now! It has been for years – remember how popular Superman and Batman were in their respective days? – but over the last decade or so it seems that every second big-budget movie has someone in a cape or tights, sometimes both!
You get capes and tights in this picture, along with a computerized tin-can costume and the magically expanding purple shorts! Yes, this is a multiple-hero picture, and to someone who doesn’t know comics at all, it might seem like a completely random assortment of capéd wondermen, ha ha! Well I used to read comics when I was a youth, and the group still seems completely random to me! I guess there’s a reason for these particular heroes to be banded together, and not just because they all work for Marvel!
Anyway, this movie is a sort of climax to the rash of hero pictures of the last couple of years! The only ones of those I’ve seen are the two Iron Man movies and that one Hulk picture that was, bafflingly, made by Ang Lee! I remember kind of liking that one! But I’ve not seen Thor or Captain America or whatever movie Scarlett Johansson’s character was in, and I don’t even remember them making a Green Arrow picture! It’s funny, the Green Arrow is in this movie, shooting his never-ending supply of arrows, but they never call him the Green Arrow, he doesn’t sport a blonde van dyke, and he doesn’t wear a stitch of green! I’ve heard of superhero revisionism, but this is ridiculous!
So without all this background I was a little lost from time to time! I think seeing Thor might clear up a few things for me at least, given that Loki, the bad guy in The Avengers – whose methods are anything but low-key, ha ha – was imported directly from that particular Kenneth Branagh joint! “I am burdened with glorious purpose,” he tells cyclopean Director Nick Fury, but, though evil, he’s considerate enough not to share the specifics of that burden with us! I figured out that he wanted to conquer and rule Earth, but why? All he can talk about is how puny and insignificant it is! Ha ha, surely there’s a better, more challenging and rewarding planet out there to conquer!
And to effect his conquering, he hires an army of space orcs from some guy with a black cape and a meatloaf face! How powerful are these interstellar warriors? Local Earthlings, even those without apparent superpowers, are able to best them in combat, so it would seem Loki got a bad deal, or maybe went bargain-hunting when he shouldn’t have! Surely there are better, more competent armies available out there in the boundless universe!
When I wasn’t puzzling over all this, I was wondering about the heroes themselves! I guess at some point, maybe in the 70s, the comics industry decided they had to just keep raising the stakes – batarangs and wrist radios and punch-ups with Nazis weren’t doing it anymore, and so both the heroes and the villains had to get more and more powerful until they were more or less gods! (Maybe that actually started with Wonder Woman, now that I think about it – she was some kind of goddess, right?) And when you’ve got gods joining the battle, what dramatic toehold can a mere mortal get? Not much! The action scenes just seem sort of weightless, far removed from any human experience!
Then you have The Hulk, who used to be just a big strong green angry guy, but now seems absolutely invulnerable and unlimited in his strength! What suspense is there in watching him? None, because it always ends the same way! And in one action scene he’s just a complete rage monster from the id, and in another, when he needs to be, he’s rational and purpose-driven, even taking basic orders from others on his team!
I won’t go on about it, because poking logical holes in a movie like this is a fool’s errand, and quite pointless! But still, having gone in completely willing to get caught up in the action-drama, these bafflements were uppermost in my mind through most of the picture! Oh well! There are still some good gags – the punchline of the Galaga joke was my favourite moment in the picture – and some appealing performances, mostly by the Hulk in his human form! There's also a great cameo appearance from Harry Dean "Repo Man" Stanton! That any of the movie makes sense at all is some sort of accomplishment I suppose, so I’m going to go ahead and give The Avengers two blood-soaked trading cards!
Posted by Burl at 23:15