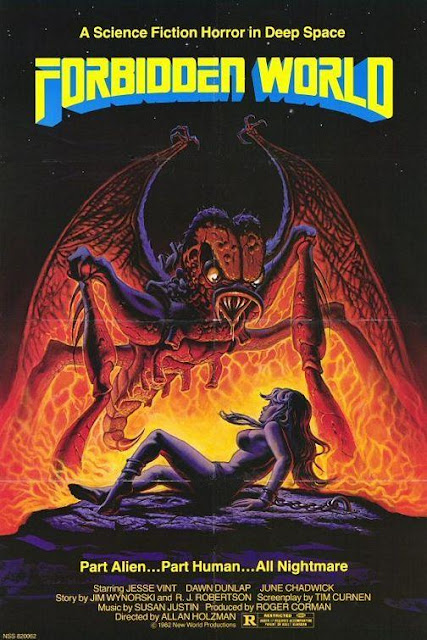 Ha ha, what’s the grossest movie you’ve ever seen? I don’t know if Forbidden World is mine, but I have to tell you, by the time the climactic barfing scene comes along, it isn’t far behind in the running! And a quick word of warning: don’t put this movie on expecting Walter Pidgeon, Robby the Robot and a very loose adaptation of Shakespeare’s Tempest! For all that you’d have to check out Joe Dante’s Hollywood Boulevard, ha ha!

No, instead you get a janitor-looking space adventurer guy, flying through the stars with his robot friend and touching down at a science colony on a distant planet with a mutant problem! Colby is this fellow’s name, like the cheese, and he’s some kind of galactic troubleshooter! He gets to shoot some trouble on this space base, you bet, of both the literal kind and in some euphemistic sense that I didn’t quite grasp!

Anyway, the plot is sort of similar to a movie called Alien – ha ha, no doubt Roger Corman, who produced Forbidden World, missed seeing Alien, because if he had he surely wouldn’t have copied it so closely here! Or it’s possible that he did see Alien but forgot about it, and then when the story for this one came into his mind, he mistakenly believed it was an original concept! Hey, it happens!

Well, when the space janitor lands at the base, he finds that the local mutant the scientists have created out of different DNAs is acting a little funny! It’s cocooned itself into a pod, but pretty quickly it busts out, eats a guy’s face, and then starts peering in on ladies as they take nude sauna baths! The janitor and his robot pal do what they can, but every minute the mutant seems to grow larger and toothier, and soon it’s not stopping at a little harmless Peeping Tomism or face-eating! Eventually the scientist from Repo Man, who smokes a lot and is dying of cancer, gets the idea that his cancer should be removed and fed to the mutant, who’s as big as a Coke machine at this point and looks hungry enough to eat just about anything! The janitor shoves the cancer down the critter’s pie-hole, and pretty soon the beast is barfing more than Linda Blair and the lady from City of the Living Dead combined! Well, that’s about it for this particular mutant! He lies down on the floor and calls it a day!

This is one of a few fun monster movies Roger Corman’s company was making around this time! I’ve always been a big fan of Galaxy of Terror and Humanoids From the Deep, two pictures which are very close cousins to, and I have to say better than, this movie! However, Forbidden World cleans the others’ clocks when it comes to pretty ladies! (A few years later it was remade as Dead Space, and you can take ol' Burl's word to the bank: you don't really want to bother with that one!)

I give this spirited picture two troubleshooting sessions, just because, even though it’s pretty cheap and the hallways of the space station are lined with styrofoam take-out food containers, it’s still cheerful and peppy and nicely shot! I suppose all that styrofoam ended up in a landfill, but there was plenty of recycling of other things: namely of space footage from Battle Beyond the Stars, ha ha!
Burl at 10:58
Share