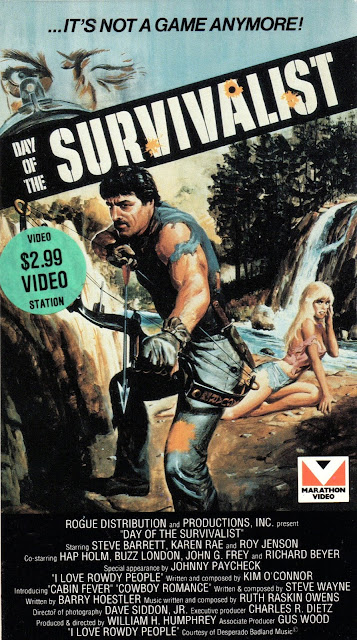 Ha ha, hello, and hello again! It’s Burl! Today I again plumbed the depths of my action movie collection and came up with an obscurity, which looks as though it was filmed about ten years earlier than its copyright date would indicate! It's called Day of the Survivalist, and it’s an awful lot like plenty of other pictures in which a lone hero ends up in some remote place battling a nasty gang of hayseeds! Avenging Force, Quiet Cool and Bullies all fit this paradigm, but the movie I recalled the most while watching the present picture was Malone!
That’s because, as in Malone, the bad guys in Day of the Survivalist are nutty right-wing survivalists who plan to take over a valley and rule it as heavily-armed kings after the pockyclipse! But the survivalist of the title is actually the hero, Fletcher, who is not himself a survivalist except in the broader sense!
Fletcher is a good-natured Vietnam vet with a pornography moustache! He lives in L.A., but becomes disgusted with city life after he gets robbed and shot lightly in the head! He goes home, opens up a Pepsi and relaxes in front of the television, but is disgusted to see news of only more crime and despair! But then something catches his eye: an elaborate ad inviting people to come and live in a remote Oregon valley! Fletcher fondles his chin for a while, then reasons that a spot widely advertised on Los Angeles television will be the perfect place for him to go for some peace and quiet!
The next thing you know, Fletcher has moved to Oregon and opened his own archery shop! At this point I thought: ha ha! Great! There must be a murder conspiracy in this valley, where they attract people there only to use them as The Most Dangerous Game, but this time their intended prey has a whole shop full of archery supplies as his arsenal! But no, there’s no conspiracy, only a handful of grumpy survivalists arming, supplying and training themselves against what they call The Crunch: the inevitable nuclear Armageddon and subsequent socio-economic collapse! Ha ha, but I couldn’t help picturing an enormous Crunch bar!
The group, led by The Colonel, try to get Fletcher to join their group, but he just thinks they’re a bunch of sillies! Then Johnny Paycheck shows up and sings a song called “I Love Rowdy People!” Johnny sits down with the survivalists for a brew, and they try to recruit him too! But Johnny begs off, saying he’s a lover, not a fighter!
Pretty soon it all goes wrong and the fellows are after Fletcher! They’re a pretty incompetent bunch, so there’s never much of a threat! Fletcher and a local lady – the sister of the most surly survivalist actually – go on the run, and eventually there’s some gunfire and flying arrows and a chop or two from an axe, and then The Colonel is dead and the movie’s over!
Ha ha, Day of the Survivalist offers plenty of pretty terrible acting – Fletcher is the best of the bunch, and I still wouldn’t say he was good, ha ha! – dull photography, uninspired direction and endless running around in the forest! On the other hand, the movie is strangely realistic in depicting how a band of right-wing, gun-loving survivalists would actually operate in a situation like this! They’re not a very slick or clever bunch, I can tell you! But these sorts of clowns do make pretty good villains, as I’ve said before! With its weirdly affable protagonist, its marvelously goofy Johnny Paycheck cameo – the most desultory guest star cameo ever filmed, it should be noted – and its grimy action, Day of the Survivalist is still a strangely compelling little picture, and I can’t say I didn’t enjoy watching it! I’m going to give it two robotic lady cops!
Posted by Burl at 17:33