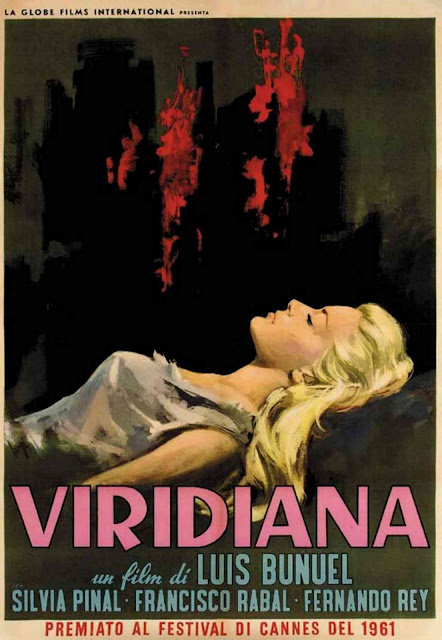 ¡Hoy! It’s Burl! I’m here to review a picture for you, a Luis Buñuel picture in fact! I’m a big Buñuel fan, but I’d never seen this one! Ha ha, it reminded me an awful lot of another one of his movies that I’ve already reviewed, Simon of the Desert! That one was made in Mexico, though, and this one was made in fascist Spain! At this distance I suppose it doesn’t make much of a difference, but it certainly must have to Buñuel!
As a confirmed anticlerical, not to mention a well-known anti-fascist, you might think he’d have been under the microscope after his return to his Francofied homeland! And I guess he was, but he still just did his thing and made exactly the movie he wanted to make, which bolsters my opinion that old Luis might have been the Coolest Director In Cinema! Ha ha, if you haven’t read his fantastic autobiography My Last Sigh, get to it! It’s absolutely marvelous, ha ha!
Viridiana tells the tale of the title character, a young and pious nun! The Mother Superior, who seems to have been rented from the same outlet which provides all movie Mother Superiors, orders her to go spend some time with her uncle, whom she barely knows and would rather not visit! But she goes, and soon her reluctance proves well-founded, for the uncle harbors a maniacal love for Viridiana! He drugs and nearly rapes her, and then proposes! Ha ha, after her refusal and rejection of him, the poor tormented beardo heads to the nearest tree to string himself up with a skipping rope! (The skipping rope reappears throughout the film, always used for different purposes, but I must confess that its significance eluded me!)
After that, the uncle’s illegitimate son takes over the estate, and a shaken Viridiana gives up the nunnery, but gathers up a parade of hoboes as a new and more Christlike way of expressing her devotion! It works out okay for a little while, but the hoboes eventually go wild with a little hoboparty of their own! Then there’s a great ending which, like Simon of the Desert, involves a fantastic pop song! Somebody should put together a compilation of the pop songs in Buñuel movies! Ha ha, I’d buy it in a hot second!
It’s a terrific picture! It looks sharp, is frequently funny, and confirms my belief that Buñuel was a real cameramaster! It’s not as plainly enjoyable as some of his other pictures, like Discreet Charm of the Bourgeoisie I suppose, but it has a power and simplicity all its own! I give it three and a half dogs leashed to cart axles!
Posted by Burl at 22:30